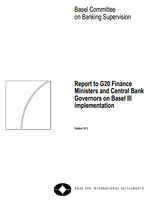 The G20 Leaders met in Los Cabos in June 2012. At this Summit, they endorsed the work of the Basel Committee on Banking Supervision in monitoring the global implementation of its standards, and urged jurisdictions to meet their commitments.

This report updates the G20 Finance Ministers and Central Bank Governors on the progress made by Basel Committee member jurisdictions in implementing the Basel III standards (including Basel II and Basel 2.5, which now form integral parts of Basel III). It also highlights specific areas that require attention if the goal of achieving timely and consistent implementation is to be achieved. The Basel Committee believes that full, timely and consistent implementation of Basel III by its members is essential for restoring confidence in the regulatory framework for banks and to help ensure a safe and stable global banking system.

The transitional phase for implementing the Basel III package  commences on 1 January 2013, by when all jurisdictions should have in place the necessary regulations. At the time of this report, eight of the 27 member jurisdictions of the Basel Committee have issued their final set of Basel III related regulations, 17 members have published draft regulations, and two members are currently in the process of drafting regulations but have not yet published them.  Given their commitment,  and the fact that the transitional date  is a publically announced one, it is especially important that member jurisdictions that are home to global systemically important banks (G-SIBs) make every effort to issue final regulations as soon as possible in order to meet the transition period deadline.

Progress and findings to date